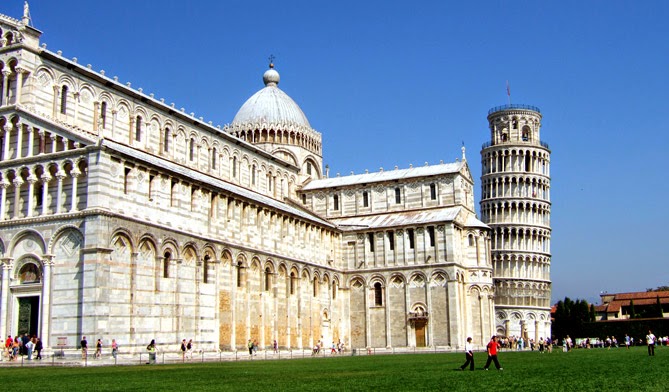 A must-see while on a tuscany vacation is the Leaning Tower of Pisa. This is one of the world's best known landmarks and an international symbol of Italy. I mean come on, there are only a few things you think of when you think of landmarks in Italy; St Peter's Basilica, Venice gondola rides, and the Leaning Tower! But needless to say, it will not disappoint being one of the most remarkable architectural structures of medieval Europe.
Built as the bell tower for the cathedral on Piazza del Duomo, also known as Miracle's Square, the tower leans approximately 13 feet off base due to the weight of the marble and the weak soil. This completely baffled and amazes crowds for hundreds of years, the tower has experienced many a calamity during its lifetime but remains still standing......well leaning. Its construction began in 1173 and went on for more or less two hundred years. the ground beneath the tower was soft and even before its completion it already began to tilt. Even so much that the builders began to compensate by angling the building. Today, if you look from the right spot you can notice that the tower is not perfectly straight. Regardless of which direction the tower is leaning, it needs to be high on your visit list. Trust me it won't take to long and it will be something that is well worth it!
Posted by UNESCO Youths at 12:37 AM 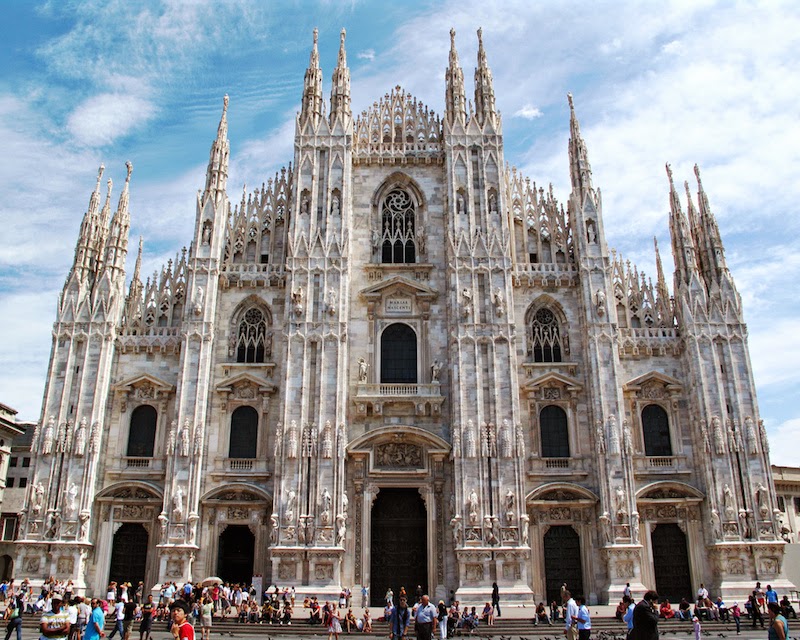 Milan’s Duomo is decidedly the most impressive structure in Milan. Standing proud in Piazza del Duomo, this behemoth cathedral has seen more than 600 years pass by and has the history to prove it! Learn all that’s behind that elaborate façade with these 5 amazing facts about the Cathedral of Milan:

1.)  The Duomo is the fifth largest church in the world!

Only outdone by St. Peter's Basilica in Rome, the Basilica of Our Lady of Aparecida in Brazil, Cathedral of St. John the Divine in New York and Seville's Cathedral, the Milan Cathedral is still one giant church! It covers over 109,641 square feet and and entire city block. Its size alone is considered more impressive than it being one of the oldest churches.

They say that there are more statues on this beautiful gothic-style cathedral than any building in the world. There are 3,40 statues, 135 gargoyles and 700 figures that decorate the duomo! Climb the stairs or take the elevator to experiences the full architecture and view of the duomo.

3.) You cans set your watch by sundial!

Close to the main entrance of the duomo, you will see a sundial on the floor. a ray of sunlight from a hole opposite of it strikes the clock. This sundial, placed in 1768, is suprisingly precise and is even used to regulate clocks around the city.

4.) It took six centuries to complete!

The construction of the Duomo began in 1386 by Bishop Antonio da Saluzzo and was supported by the ruler of Milan Gian Galeazzo Visconti who had grand visions of the cathedral. though originally started in terra-cotta stone, once the stature of the project was realized, they soon changed it to Condoglian marble. Heavy construction continued for another 200 years.

After its consecration in 1418 Milan Cathedral remained incomplete for centuries. Politics, lack of money, indifference in a seemly never-ending project and many other setbacks kept the cathedral exactly the way it is. Napoleon was the person who continued the building of the structure in the 19th century and even to this day the Duomo is still being worked on.
Posted by UNESCO Youths at 12:22 AM

Royals in the Circle

Tuscany presents many lustrous attractions, it presents the gloriousness that is the Renaissance and it can give you royalty in the most peculiar places. Just about thirty minutes outside of Florence, there is a town of Cerreto Guidi. Now, on a map I didn’t even give this puny little town (paesino or cittadino for all you up and coming Italian enthusiasts) a second glance. However, when diving into the significance of this little town’s history I found some extraordinary events.

At the heart of the village is a circle of house and roads that all lead to centrally dominated 16th century Villa Medicea. One may look at this villa and think “no biggie”; however, this isn’t just a villa of a normal family but is the villa of the Medici family. The villa was designed and built by Buontalenti in 1555 by order of Cosimo I dei Medici who used it mainly as a hunting residence for the family.  Though, the villa is quite famous due to a legend that surrounds the mysterious death of Isabella dei Medici: it is said that she died at the ands of her husband, Paolo Giordano I Orsini, duke of Bracciano, who strangled her after a presumed betrayal. One can begin to understand where the animosity of the Orsini and Medici originated! Since then, it is said that the ghost of the sad Isabella still roams around the villas seeking peace. Though, I found the villa very peaceful with its surrounding landscapes and rolling Tuscan views. Maybe Isabella realized that she was in Tuscany and so roaming around a circle for centuries was boring. 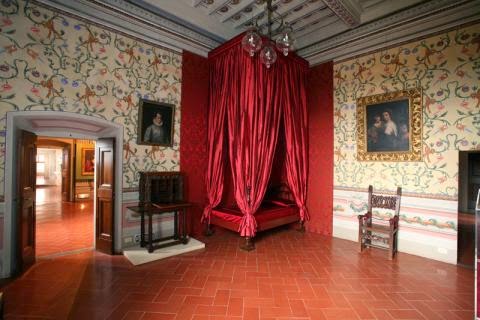 Now a day, the legend brings in many visitors who are eager to see what the Villa offers, and in reality it offers a home full of family history. I felt as if I walked into a person’s lake home back in Texas. The house met its purpose; a purpose to be a retreat and the ambiance it gave off was just that of retreat. It was secluded in a circle, in a speck of a city and tucked in the hillside. It was personal. It felt personal, and I loved every second of it. The house today is full of all the Medici’s personal portraits, splendid furniture and hunting weapons (since it was a Hunting lodge). It is complimented with a personal garden for a stroll, and a church for the Medici’s to repent for their sins so they were probably in there nightly.


Take the 30-minute west towards Pisa, get off at Empoli, take bus 49 up to Cerreto Guidi and get lost in the streets. It won’t be hard to find where you’re going eventually, because soon you’ll be standing in a circle full of royals.  Maybe you’ll see Isabella.
Posted by UNESCO Youths at 8:10 PM

Here They Lay At The Gothic Line 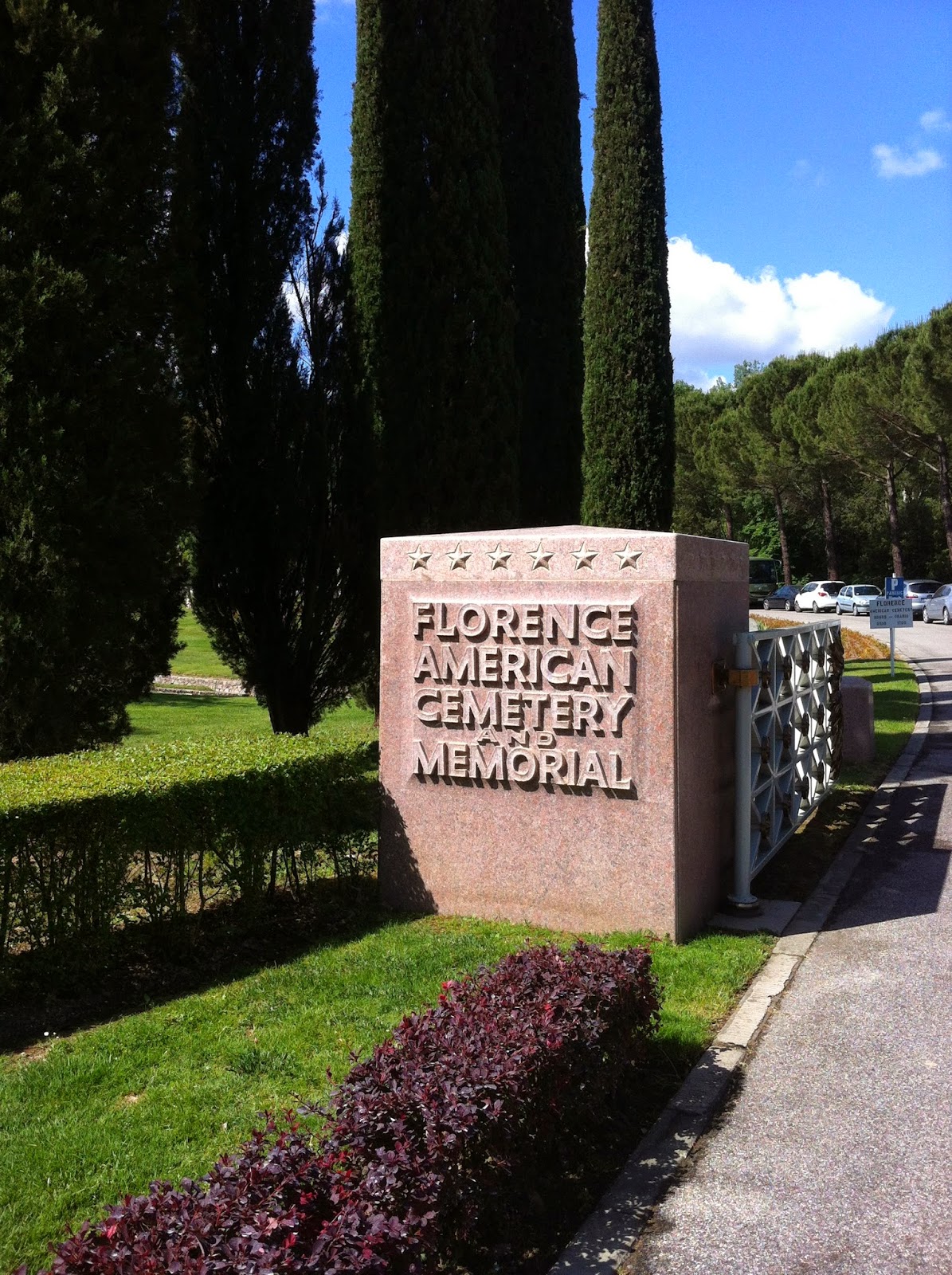 The European Union was founded on the principles of peace and unity, in attempt to prevent the world from ever witnessing the horrific scene of a world war again. Monday May 26th, 2014 marked the 69th year of the end of the last world war that shook Europe to its core. One can, and should, go to Arlington cemetery just on the outskirts of Washington D.C.’s center and witness the thousands upon thousands of brave men and women who gave everything for our country and one should marvel in the splendor of their death. However, there are more precious gravesites scattered all over this earth in constant remembrance of those men. One being along the Gothic Line, which is several miles outside the center of Florence Italy.

The Florence American Cemetery holds over 1400 men, and remembers nearly 4000 plus men who are missing in action till this day – sobering can’t describe the emotion that hits upon entering the memorial site. May 26th, Memorial Day, saw both the American brigades and Italian brigades stand in unity as taps played gently through the air, while a 21 gun salute pierced the pain that was left behind. These 1400 American men died at the Battle of Florence, never to see their home, never to watch their children grow, never to kiss their wives all for the name of freedom. Yet, what they sacrificed allowed the preservation of one of the most famous cities in the entire world. Towns like Chiussi and Ravenna were complete destroyed; yet, Florence was salvaged. Thankfully, both Nazi and American commanders realized the significance of Florence and mandated that troops did minimal damage. The clock tower and façade of the Duomo received the most damage, as it was necessary to destroy both as German snipers reined terror down on the allied forces trapped around the Baptistery. 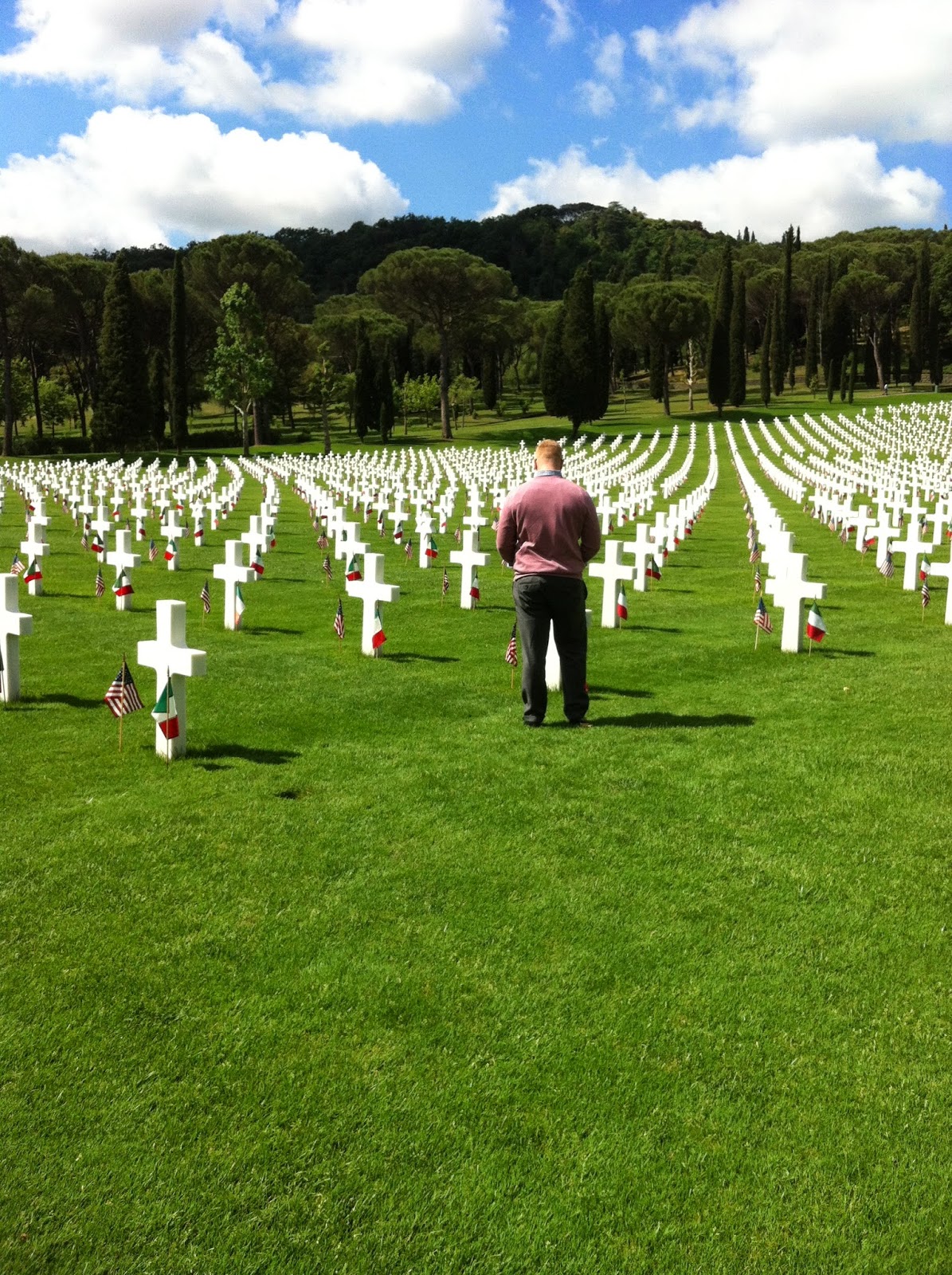 69 years ago men fought to liberate Italy, men fought to preserve a culture doomed to be blown away from the memories of time just as Napoleon tried to do to Brussels. The significance that lies in the cemetery lies six feet below the surface. Oh the precious ground, the surreal feeling that surrounds me is overwhelming. I get emotional when I visit Arlington, but this emotion is different. It’s gripping. I encourage you who may read this to go to this cemetery, breath in the sacrifice, take in the history that lies beneath you. The Gothic Line was bloody, it was terrific for those 19-24 year old men, it was death for 1400 and here they will lay for all the remember them just behind the Gothic Line.
Posted by UNESCO Youths at 4:44 PM

A House for My Second Cousins

The Medici family owned Florence back in the day. Their palaces were the most elegant homes in all of Tuscany. It’s only fitting that you visit them! If you don’t want to wait in line and deal with the massive crowds in Palazzo Vecchio, then I would suggest visiting Palazzo Medici Riccardi. Towards 1444 Cosimo the Eldest, the patriarch of the Medici family commission to Michelozzo a place to be built in via Larga near the San Lorenzo church. The palace was to be the first Renaissance building erected in Florence. Known for its delineated and rusticated floors and huge cornice crowning the roofline, the palace stands out for its arched windows arranged along the front and the closed loggia on the corner of the building.

After the Medici moved to Palazzo Vecchio in 1540, the palace became the home for lesser family members until 1659. Ferdinando II sold the home to the Ricardi family. The Riccardis took it upon themselves to take the palace and enhance its appearance on the inside. The most important works consisted in the large hall decorated with the frescoes of Luca Giordano who gave one of the most extraordinary examples of Baroque architecture in Florence. They also added a new staircase in the entryway designed and built by the architect Foggini.

Now Palazzo Medici Riccardi  is a major museum of Florence. Since 1972, the exhibition area of Palazzo Medici Riccardi has offered both tourist and visitors a chance to see not just the historical pieces of Foggini and Giordano, but holds pieces of modern and contemporary art as well. When you do visit, please make sure you enter the Chapel. This Chapel was frescoed in 1459 by Benozzo Gozzoli showing the Procession of the Magi. This fresco showed the train of the Concilium that was occurring in Flornce in 1439.

For a house for the lesser family, this place is still quite fantastic. Waking down the halls of this majestic palace showed me the true power and wealth of both the Medici and the Riccardi families. With the elegant Baroque and Renaissance feel along with a beautiful courtyard to match, I would have love to be a second cousin to their family.
Posted by UNESCO Youths at 11:10 AM